Where are we up to with the Gladesville Master Plan?

The commercial zone along Victoria Rd from Junction St to Pittwater Rd is within a heritage conservation area and the Trust is opposed to the relocation or removal of the belatedly heritage listed Schedule 5 item at 10 Cowell Street, which was also sold to the developer but not adequately protected at the time.  The timber cottage can provide a low-key transition from the commercial to the residential zone which should act to inform and shape the redevelopment of the GSV site.  The issues are: 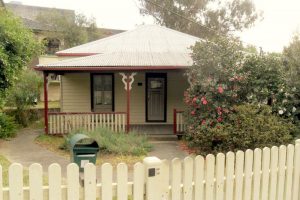 Council has targeted Gladesville Town Centre, particularly the GSV site, to provide for the NSW government’s housing projections for Hunters Hill LGA in its Local Housing Strategy.  Opposition to this was expressed during the Strategy’s consultation process as it places unreasonable and inequitable over-development impacts on Gladesville residents and will be detrimental to heritage values.

The community has not been assisted in this review process by having no models and relevant visuals presented, such as at the main Shopping Centre.  It is hard to visualise how a ‘town square’ could be accommodated within either of the three options for Block 4, given the shared right-of-way requirements for vehicles and future increased pedestrian users of the site.

It is also vital that the existing car park at 3A Cowell Street remains as such within the LEP and continues to provide much-needed public car parking to serve residents’ needs as well as keeping small local businesses viable.

Hunters Hill and City of Ryde Councils need to liaise on creating a more cohesive approach to development within the precinct. Consideration must also be given to greater linkage across Victoria Road by strategically connecting Trim Place to the core of the retail and Post Office shopping strip.  There is an opportunity to apply sustainability principles to urban renewal at Gladesville’s Town Centre and take account of climate change mitigation and improved liveability.

The HHLEP must not be amended to allow any increase to the existing FSR of 2.7.

*FSR refers to Floor Space Ratio, the measure for bulk. More FSR means more flats (and/or commercial space, but most of this development is about building more flats).