What’s the community benefit of 20 year licence over Boronia Park?

Boronia Park is dedicated crown land reserved for Public Recreation, however the proposed Licence Agreement between Hunters Hill Council and Hunters Hill Rugby Union Football Club, allows the Rugby Club almost exclusive rights to the planned facility and expanded use of all 3 playing fields plus parking areas and access roads, for a period of 20 years.

Council argues that the Rugby Club will not need to pay for use of the facility, or contribute to its maintenance, because of their ‘significant financial contribution’ to Council. This contribution consists almost entirely of Government grants, and tax deductible donations. The guidelines of the three government grants effectively “gifted” to Council and/or the Rugby Club by local State and Federal politicians, are ambiguous.

None specifically state that it is to fund construction of the facility identified in the approved DA as the ‘Boronia Park Sports and Community Facility’ for which there has been no open tender process and a lack of transparency as to whether the combined funds will actually cover the final cost of the building. 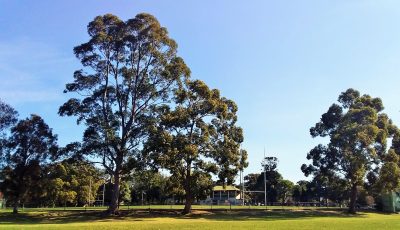 Site of new ‘facility’ will involve cutting down these mature Eucalypts

The Trust objects to the proposed licence, which will result in ratepayers being responsible for the long term upkeep of the ‘facility’. It is highly unlikely that residents will receive any significant benefit because the bulk of the bookings will be for the exclusive use of the Rugby club.

We question whether Council has demonstrated responsible management of its finances or of the public land under its care and control.