Yet another threat to our heritage…..?

The Supreme Court of NSW today upheld the decision to allow the NSW Government to demolish the 140-year-old locally heritage listed ‘Willow Grove’ in Parramatta.  The North Parramatta Residents Action Group (NPRAG) challenged the planning approval on the basis that the environmental assessment failed to meet essential requirements designed to protect Parramatta’s heritage. 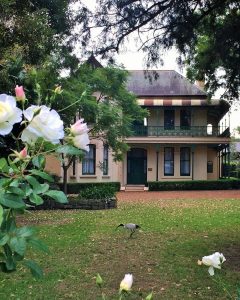 Greens MP David Shoebridge said: “Today’s decision is a tough one for the campaign to save Willow Grove but the fight is far from over and the Green ban remains in place. So much of Parramatta’s heritage has already been destroyed by overdevelopment that saving Willow Grove is now even more important.  The Berejiklian government now needs to explain to the community how knocking down Willow Grove is ‘essential’ work during a lockdown.

Regardless of today’s judgment the Green Ban remains in place and the community fight to save Willow Grove continues with the strong support of the union movement and local campaigners.  Thank goodness Parramatta has staunch supporters like the North Parramatta Residents Action group, which has saved Willow Grove so far and continues to stand strong against these threats of destruction.  Parramatta should not have to choose between having a world-class museum and retaining its precious heritage – it deserves both and that’s our goal in this campaign,”  Mr Shoebridge said.

Review of the NSW Heritage Act 1977
There is grave concern that the current Parliamentary Review of the NSW Heritage Act 1977 is an attempt to water down protections for heritage across our State perhaps prompted by the long running battle to save historic Willow Grove Villa on the Parramatta Powerhouse site. The 130-year-old heritage building is set to be relocated for the construction of the Museum (on the site of a floodplain), in spite of the government’s Environmental Impact Statement attracting over 1600 submissions, more than 90% of which argued against its removal.  Heritage experts and architects have expressed doubt as to whether it can be dismantled and reassembled, given the age of its materials.

We are concerned that the current Parliamentary Review may propose amendments that further erode the protection and conservation of our heritage places.

The National Trust (NSW) www.nationaltrust.org.au/initiatives/heritage-act-review-2021 notes the Act is the single most important instrument in our state that identifies, protects and conserves our heritage. The Trust’s submission is here HHT submission Review of NSW Heritage Act

The North Parramatta Residents Action Group has been fighting against the proposed demolition of Willow Grove for over a year and the Construction, Forestry, Maritime, Mining and Energy Union (CFMMEU) enacted a Green Ban on Willow Grove in June 2020.  Very reminiscent of the inspiring battle for Kelly’s Bush 50 years ago this year but why are we still fighting to protect heritage against ‘development at any cost’?

On 16 June 2021, the Land and Environment Court ruled in favour of Infrastructure NSW, giving the government permission to relocate Willow Grove to an as yet undecided site and on 21 June 2021 – 7 minutes after the undertaking for no works to be carried out had expired (at 9am) – Infrastructure NSW gave the order for  non unionised contractors HAUS Building Services to commence works!  Many residents joined the hundreds of CFMEU reps blocking all three gates to the entire site and the combined efforts of the community and the union successfully blocked further work.  Judgement on its fate is currently before the Supreme Court.