While renowned for its significant stock of fine nineteenth and early twentieth century buildings, Hunters Hill is also home to some modernist gems from the 1950s, 1960s and 1970s.  With many of these more modestly sized, yet excellent buildings coming under threat from unsympathetic additions or demolition – notably the recently demolished 34 Barons Crescent – it’s time to consider the recognition that the more outstanding local examples of this style of architecture might warrant. 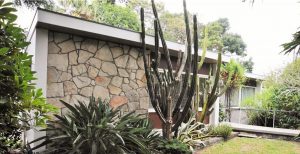 To start a conversation on the topic of “Hunters Hill Modern” the Trust is preparing an inventory of mid-century houses and buildings.  If you know of a building you consider might meet this criteria, we would welcome your input!  Email us at huntershilltrust@gmail.com 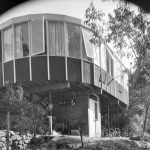 Although we have sadly lost some of these ‘gems’, we are very lucky to still have several examples of this classic style existing in Hunters Hill. One such example is 33 Bonnefin Road, designed by well-known Melbourne architect Sir Roy Grounds in 1954. Sir Roy designed it for his friend, the journalist Tilly Shelton-Smith, who was the first woman to report from a war zone in World War II.

Sir Roy is best known for the Victorian Art Gallery and was one of Australia’s leading 20th century Modernist architects. Originally the house was known as Tilly’s hat box house and was minute, with an area of only 55 square metres. It was subsequently sympathetically added to by our very own heritage architect (and former Trust president) Tony Coote. The house was heritage listed by Hunters Hill Council in the 1990s.


We are delighted to have enlisted the help of our local celebrity, author and advocate for mid-century architecture, Tim Ross, who will be assisting us in preparing an inventory of these classic gems.

The Trust is also working with Council to reassess the heritage value of housing from the inter-war period, the so-called “contributory items” that, while not heritage-listed, contribute to the unique character of Hunters Hill.   As many of you will know, charming and sound bungalows from the 1920s and 1930s are being altered beyond recognition, or demolished, all over the municipality.

The LEP revision this year may be an opportunity to secure more protection for buildings in this category.  Stay tuned for more on this in the upcoming months!